“The prince and master of all Scholastic doctors,” Thomas Aquinas (c. 1224–1274) has profoundly impacted thinkers both inside and outside the Roman Catholic Church for more than eight hundred years.

Scott Oliphint’s unique study focuses on Aquinas’s dualistic approach to the natural and revealed knowledge of God and his use of Aristotelian metaphysics. Oliphint provides a response to this methodology in the context of historic Reformed thought and the doctrines of revelation and Scripture.

Pastors, theologians, philosophers, and students will benefit from Oliphint’s clear, precise, and succinct analysis—as well as from his forceful critique.

“This brief study focuses appropriately on the foundational principles that control the thought of Aquinas, showing, along with its notable strengths, the deep tensions inherent in it and its incompatibility as a whole with epistemology that would be true to the self-attesting revelation of God in Scripture. This fundamental failing is brought to light especially in his related views of natural reason as neutral and natural theology. The author’s treatment warrants careful consideration by all those interested in understanding Thomas and subsequent Thomist positions.”

“Thomas Aquinas is a familiar name to students, clergy, and theologians. He towers over the history of theology. But his work is often simplistically dismissed or badly misunderstood. Regrettably, while many read about him, few read him. But that is rapidly changing: we are in the midst of a revival of serious interest in Aquinas, particularly among Reformed theologians. Historians of the Reformed tradition working in primary texts have reminded us of facts easily overlooked: that there is Thomas and there are Thomisms, that Thomisms of various kinds significantly influenced the early Reformed theological tradition, and that understanding the relationship of Thomisms to Reformed theology requires patience and nuance. In an earlier generation, Cornelius Van Til helped focus some of the most important epistemological and theological questions that we must ask of Aquinas and his legacy. Professor Oliphint has come along to help us do just that, with the result that we have an informed, succinct, and edifying entrée to one of the most important thinkers in the history of Christianity. Students of Aquinas would start their reading here with great profit.”

—Mark A. Garcia, President and Fellow of Scripture and Theology, Greystone Theological Institute

“Despite the limited scope and brevity of Oliphint’s discussion of Thomas Aquinas, it wonderfully contrasts how Aquinas and later Reformed theology think of the two foundations of the Christian faith: namely, knowledge and existence. This study accurately captures the central points of Aquinas’s view and offers a cogent, biblical, Reformed corrective. Furthermore, this study nicely demonstrates how a Reformed corrective to Aquinas is foundational to a sound Christian theology today, especially as grounded in the glorious triune God and his revelation. I enthusiastically recommend this work for all students of theology and apologetics.”

K. Scott Oliphint (MAR, ThM, PhD, Westminster Theological Seminary) is professor of apologetics and systematic theology at Westminster Seminary in Philadelphia, the author of many books, and a world authority on the works of Cornelius Van Til. 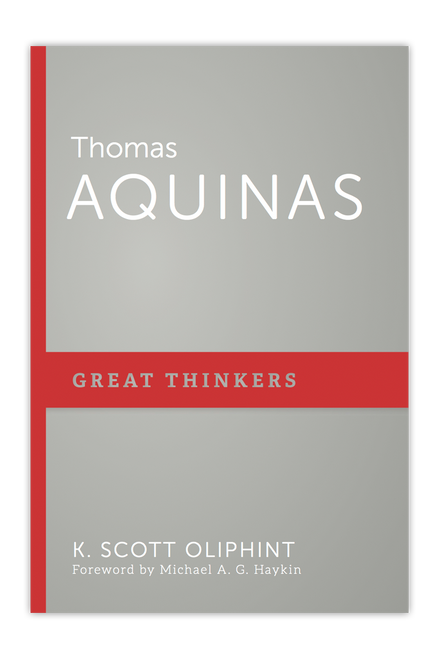