For centuries, skeptics have disputed the claims of Christianity—such as belief in an eternal God and the resurrection of Jesus Christ—arguing that they simply cannot be accepted by reasonable individuals. Furthermore, efforts to demonstrate the evidence and rational basis for Christianity through apologetics are often deemed too simplistic to be taken seriously in intellectual circles.

Apologist and theoretical chemist Neil Shenvi engages some of the best contemporary arguments against Christianity, presenting compelling evidence for the identity of Jesus as portrayed in the Gospels, his death and resurrection, the existence of God, and the unique message of the gospel. Why Believe? calls readers from all backgrounds not only to accept Christianity as true, but also to entrust their lives to Christ and worship him alone.

Part 2: The Trilemma
Liar, Lunatic, or Lord
The Historical Reliability of the Gospels
Jesus’s Claims
Objections to the Trilemma
A Final Suggestion

Part 4: God and Revelation (Part 1): Nature
Why Is Mathematics So Successful?
What Caused the Universe?
Why Is There Something rather than Nothing?
Why Is the Universe Finely Tuned for Life?
Objections to a Theistic View of the Universe
Evidence and Worship

Part 5: God and Revelation (Part 2): The Moral Law
How Can Objective Moral Values and Duties Exist?
Why Should We Seek the Truth?
Revelation and Scripture
Evidence and Commitment

Part 6: Arguments against God
The Problem of Evil
Evolution
The Hiddenness of God

Part 8: The Gospel (Part 2): Christianity and Sin
Are We Radically Morally Corrupt?
Sin in the World
Sin in Our Hearts

Part 9: The Gospel (Part 3): Christianity and Salvation
Sin as Transgression
Sin as Slavery
The Gospel of Grace
Objections to the Christian View of Salvation

Part 10: Conclusions
What’s Missing from This Book
The View from Somewhere
The Logic of Repentance
By Grace through Faith
The Good News of the Kingdom
The Step of Faith

“I love this book in terms of both content and tone. Neil Shenvi has thought deeply about these issues and provides a reasoned case for Christianity. He also responds to some of the most common objections with clarity and precision. I hope Why Believe? gets the wide readership it deserves.”
Sean McDowell, Associate Professor of Christian Apologetics, Biola University; author, Evidence That Demands a Verdict

“Shenvi’s interaction with critics of Christianity is instructive for those of us supporting Christian faith. This is a worthy book for your apologetical library and a great resource for moving forward in a society that constantly challenges us.”
George Yancey, Professor of Sociology, Baylor University

“What an outstanding work! Pound for pound this is the best apologetics book I’ve ever read. Shenvi has done a great service to both the church and the broader culture. Christians will find an excellent resource for both the strengthening and the defense of their faith. Non-Christians will have an accessible pathway to understanding the Christian faith that will challenge their beliefs and presuppositions while engaging their minds.”
Pat Sawyer, Faculty, University of North Carolina, Greensboro; coauthor, Disney as Doorway to Apologetic Dialogue (forthcoming)

“This book provides a clear and cogent exposition of arguments for the authenticity of Christianity in the light of modern historical and scientific evidence. Shenvi brings a coherent, impassioned, and well-reasoned perspective to a number of challenging topics. His approach is appropriate for anyone—Christian or not—who wishes to know more about why Christians believe what they believe.”
Troy Van Voorhis, Professor of Chemistry, Massachusetts Institute of Technology

“Neil is one of our generation’s most engaging and forward thinkers. His insights are forged not in sterile halls of academia but through vibrant discussions with students, thinkers, and leaders in today’s halls of influence. This is an excellent resource for thorough, sound answers to today’s most difficult questions, not yesterday’s. I’ve had the privilege of serving as Neil’s pastor now for nearly a decade, and I can attest that he not only teaches the truth of the gospel but lives out its grace.”
J. D. Greear, Pastor, The Summit Church, Raleigh-Durham, North Carolina; author, Just Ask and What Are You Going to Do with Your Life?

Neil Shenvi (PhD, University of California, Berkeley) has worked as a research scientist at Yale University and Duke University and has published over thirty peer-reviewed papers. He is married to Christina and currently homeschools their four children. 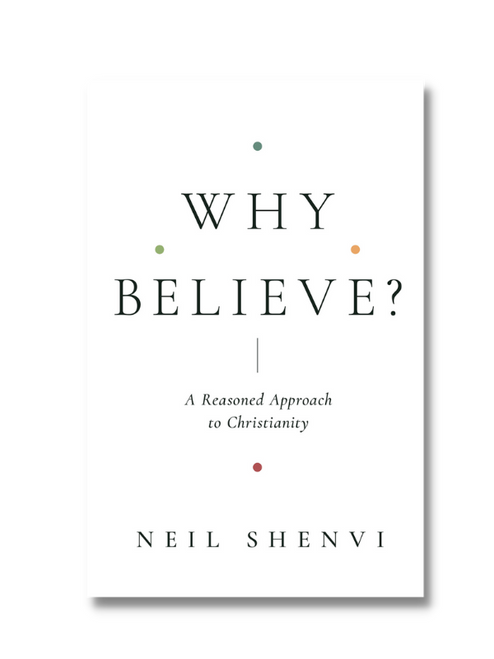